These posts are part of a fabulous series on “Foods of Pakistan” from my friend Bilal Umer. Thank you for sharing your culture with us!

“I wrote about Pakistani places in my last episode in February 2012. Food focuses the culture and weather of the region. Here I decided to write about the rich food of Pakistan in different cities. This is also a gift for Emma Lovelly to enjoy untouched Pakistani food. ” – Bilal Umer

Sindhis daily food that is usually eaten by the sindhis, consists of flat-bread that based on wheat with the rice and two dishes accompanied one gravy and other is dry. Sindhi food is also famous today in many countries especially in India, where the majority of sindhis are migrated when indo-pak partition occur.

When islam arise within south asia the changes occur in a variety of manners. As in islam Muslim are forbidden to eat Haraam, and the Halaal dietry eating and food strictly observed. Muslim sindhis used to eat beef, lamb, fish,chicken and vegitable included fruits and dairy.

The list of food that mostly eats by sindhis is given below:

If anybody gets suffered with chicken pox, then sweet koki or called Lolo or Mithi Loli is made in Sindh.A sweet roti made with sugur, butter, and milk called Maal-apuroo Mithai Maani. A sindhi food that is like a porridge dish mix with rice and served with yogurt (Ku-ini Kich-anee). Baked bread mix with chick peas and thick gravy (Chhola Dhabal). The different kinds of biryaani served with variety of things and food in sindh. These have their different taste and very delicious. Sindhi recipe of spices mixed with boiled steamed rice called Sindhi Biryaani. Vegetables mixed with chick pea flour form Sindhi Curry. 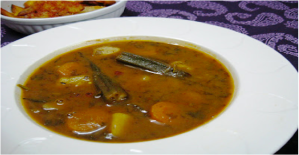 Chapatti made in green sauce and tomato, coriander and other spices (Seyal Mani).Bhugi Bhaji.Mixed vegetables that cooked with the paste of Garlic.

Desserts and sweet drinks, that usually sindhis made and baked are also very delicious and tasty.

The famous sindhi drink that specially made from Almond, khashkhaash(Thadal).

A big pede’ made with wheat and sugar chaashni.

Hot drink that made with milk with cardamoms and Saffron flavor.

A drink made from Sandal wood called Sherbat.

Other many more drinks that sindhis serve, and enjoyed.

Pickles are famous all over the world; the city of Shikarpur is famous for the item. Every kind of pickles they produce included: 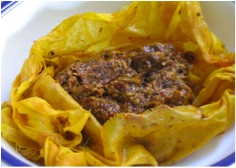