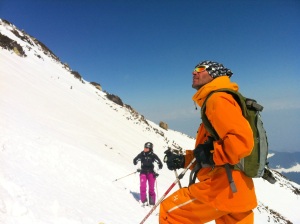 A short drive down the hill from Gulmarg is the village of Tangmarg where we stopped before I went back to Srinagar. The car dropped me to Tangmarg and I was met by my dear friend Fayez and taken to buy chocolates for his kids ( I always like to give a gift.) we then drove a short 5 minutes and he played my song of the trip “Chamak Challo”. We stopped the car on a road near his house as we would walk through the snow to his house as it’s not safe for cars in winter.

On route to his house through beautiful snow covered trees and over a small river, we saw 2 of his other houses where in each one of his 4 brothers stays. Fayez has 6 siblings, 3 brothers and 3 sisters!! We then arrived at a tall 3 storey house – Fayez is a proud man.

Made of what I could see to be timber and then some form of cement, we walked up 2 sets of stairs and into a large sitting room with beautiful carpet laid on the floor and rich red kashmiri cushions. There were lovely curtains draped over the windows and the room has a warm atmosphere. Soon after we were joined by 3 year old girl, Nida, and 2 year old boy, Arif, with Fayez youngest sister, just 1 year younger than me. Amazing to see this skier and guide who has led me through dangerous terrain all week sitting  on carpeted floor with his 2 babies under his arms – so sweet.

I gifted the kids a chocolate and cookies packet each and they quickly got into the chocolate with glee. So cute- they peered at me curiously and munched on their chocolate- looking so sweet in their traditional wool capes.

The hospitality of Kashmiri’s is second to none and I was brought a big thick blanket by Fayez wife Ruksena, and his brother and sister in law. They also brought me the traditional coal basket (link to other blog on coal baskets) to warm my feet under the rug. The women greeted me by shaking my hand and kissing my hand, it’s so sweet and such an honour. We took a hot milk drink ( get name) and cookies and some delicious kashmiri sweets.

After the snacks I had the great honour of meeting Fayez mother, I had remained sitting under the rug til this point but when she entered the room I rushed to meet her and  made a Namaste hand pose and dipped my head, she took me in her arms and hugged me tight once on each shoulder, but a long and strong embrace. I felt  tears welling up and also felt the love of a mother – nothing compares to the hug of a mother and I felt so warm and nurtured. She took my face in her hands and kissed my forehead before leading me to sit under the rug and she sat next to me holding my hands. We had photos (unfortunately some came blurry) and then I showed her pictures of my family and also of her son Fayez skiing. We couldn’t understand each other but I thoroughly enjoyed her company. My driver Mushtarq was also now in the room and was helping translate.

We had a traditional Kashmiri meal and to Fayez’s delight I ate with my right hand only. We had naan, rice, paneer in red sauce, mutton shish kebab, chicken meat balls in a cream butter sauce and a chicken drumstick. It was really tasty food as always home cooked food is and only there was too much. It was so wonderful.

After lunch I kept warm with the 2 kids jumping on my lap and taking photos. The beautiful three year old perched up on my knees as I laid on my back and we played photo posing. She then started to pat my hair hahah. She was fascinated by the colour and kept stroking it. So sweet. Her little brother came over soon after and gave me such joy with his funny faces and warm face- we laughed so much all together.

Mushtarq announced it was time to go and I felt so sad. I’d had such a nice day and really felt part of the family. We took one big family shot and then hugs and kisses all round. I really felt close to tears, also would have to say bye to my friend from the week Fayez. We waved goodbye as I walked out into the snow and Fayez took my arm to lead me to the car. He checked with me that I would stay in touch and I would return – I promised I will – and in my heart I know it’s true. I got in the car and waved out the window and shook my hand whilst shouting “chamak challo”.

How lucky I am to have such visits and to be so blessed to be included as one of the family. If someone ever invites you to their home to enjoy a meal and to be part of the family, do yourself a favour and go. Home stays in countries such as India are second to none and one of the most humbling and heart warming experiences one can have.