I have to say that China was not at the top of my travel list. I’m very aware of the mega nation and have many friends who have been to visit and enjoyed themselves greatly. For me, there just wasn’t something drawing me there.

This year, 2013, I’ve heard a lot about China especially in regard to Inspired Adventures and their many Great Wall of China Challenges which is something I’d really like to do one day – and it made me investigate more what people were doing when they were visiting.

I haven’t got a lot of time to visit but I have set aside 2 days to visit on my way back from Europe this December and my stopover on 21st November 2013 will be my first stay.

I found on the China Southern Airlines the staff a little short in temperament and abrupt. Not overly friendly and sort of just going about their job- pleasant enough but not outwardly friendly. This was something I had heard about China from a few close friends. It’s not an active mentality to come across as rude it just seems to be this is the way that people interact. 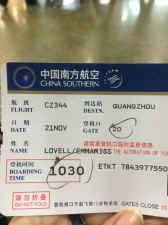 The trend continued at the airport when I asked for help – people did help, but they kinda just wanted to give the answer and have me move along. I had a very nice girl sit next to me on the plane, originally from China and now living in Melbourne, so she was assisting me to figure out where to go and what to do. There were also some people trying to get me to go to their hotel and take their taxi, but even when they couldn’t get my business, they still tried to assist. I noticed that the English thing was a bit of a challenge. Totally respect that, I’m in China now and I most certainly do not speak the language over and above “Nihao (hi” and “ Shay Shay “ Thank you” ) so we did our best with sign language.

The climate was nice – not too cold as it should be Winter, though the next day was actually very humid. There were lots of trees around the airport and it didn’t seem too polluted. In the morning it did seem quite smoggy and there was a haze all around the airport – apart form being a little flustered, It was a nice temperature and very much an Asian country. The familiar smell and the look of the trees just reminded me a little of arriving in Indonesia or Singapore.

I got to the hotel and the rumors were true- No Facebook! Some of my other social media channels were limited too – but, I was able to survive 12 hours without it. Actually it let me focus on other things – good thinking China, increasing productivity! But not so great for me long term as a social media specialist….

I think my most interesting experience thus far (yes in the short space of time I was there) was in the café in the airport in the morning. I went to the front counter and asked if they take credit card, I seemed to be most inconveniencing them and also not following their café system. I was quickly directed to a table. Ok. Then the wait staff seemed to be talking to the kitchen and other staff across the restaurant, rather loudly… most peculiar. The service wasn’t very friendly and I was definitely just supposed to order eat and go. I managed to crack a smile out of the waitress as I paid my bill and dropped her pen onto my sandwich- go figure!!

So overall – I’m intrigued. There seem to be some great systems in place and some innovative ways- I found a few bottlenecks in the airport with perhaps too many cooks, i.e. too many staff, but otherwise it was good. The hotel was comfortable and the area around looked pretty. I look forward to checking out the city. I’ll keep trying to make the individuals I encounter crack a smile and accept that perhaps not everyone is chatty Kathy like we are in Australia,  and that that’s not always helpful!

As I walked through the airport, I saw an incredibly beautiful billboard with boats on the water with buildings that appeared to meet the water and snow capped mountains in the background  – it plugged at my heart strings and I think China has A LOT to offer and I’ve not even cracked the ice yet!

So – see you in a month China – and hopefully another adventure will be on the cards again soon.