First stop on my big adventure for 2013 was to be a new one, a stopover in Guangzhou, China. I will be returning again to Guangzhou on the way home for 2 days so this time is just a one nighter on the way to London. I chose the Gunag Sha Hotel close to the airport and had a most pleasant stay.

I was tempted to use the first night to explore the city and scout it out for next time but for once I used better judgment. I decided instead to get a hotel nice and close to the airport and have a quiet night and make it easy for myself when I had to be checked in by 7.30am for a 9.30am flight.

A colleague of my mothers recommended a few hotels in Guangzhou, though a little more pricey then I’d like, and the Guang Sha Hotel just happened to be on the bottom of the page. I paid approximately $70 (AUD) including taxes for the twin room. I was a little skeptical with the pricing and when I first arrived at the hotel. The foyer was a litter older and very basic and the hallway to my room resembled a hospital.

I was pleasantly surprised with charming décor, very clean and a modern TV. The shower was super hot and fresh and toiletries were provided. I also had a lovely big set of windows with trees outside and what appeared to be a nice view though it was night. 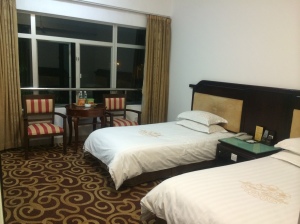 Another nice surprise was buckets of noodles on offer. You did have to purchase them – but this is a beauty of Asia – delicious noodle snacks. I resisted but I was excited. 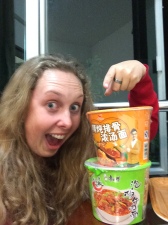 I think I will give this hotel a 4 out of 5 in my rankings for a budget hotel. Clean, quiet and nicely decorated. There was a comfy bed, all facilities on offer including restaurant and free WIFI in the foyer. The staff were a little sharp and a tad unfriendly – but I am seeing that it’s not actively being rude, it’s more a cultural thing, and that’s just how the service is. They did provide hotel transfers to and from the airport and this was very helpful and the drivers were sweet. 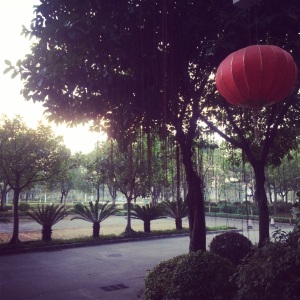 Most recommended for a stopover if flying China Southern Airlines via Guangzhou.