One of my greatest fears in Travel of recent has been to be daring enough to take on a Tiger Airways flight. But I have now overcome my fear, and I must say – I eat my words, Tiger is just fine. 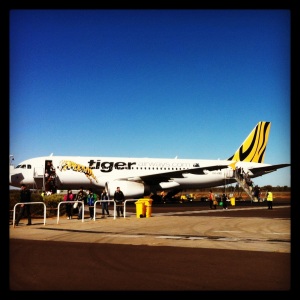 I was never a fan of the low cost carrier but in 2010 chose to take a flight to Melbourne and give them a go.  As I arrived to the airport, I found out a bird had flown into the engine and my flight was cancelled. I was lucky to be at the back of the queue and had time to run over to Jetstar and get the last seat on a flight that night for a whopping $264 as opposed to the $85 I’d paid for Tiger Airways. I was fuming and vowed never fly them again, as my suspicions had been proven correct, they were unreliable.

However, when it came time to book to go to Alice Springs this July, it appeared they were the only choice. Well it was $250 for Tiger Airways or $1000 for Qantas……. That makes only one choice, and it was Tiger. I booked for just over $300 return with taxes etc. I then waited in anticipation and trepidation for my flight to come.

Even on the morning of the flight, I had little faith that I would make it to NT on time or at all. My friend dropped me to the airport and didn’t even know where Tiger terminal was – he’d never flown them either- and even took the liberty of sending me a “safe flight” message…. He was genuinely concerned- whilst also laughing at me.

I checked in… on time. I got through security… I even got something to eat! We boarded the plane via the tarmac after a bus ride from the terminal. I was that exhausted when I got on, I virtually passed out before we took off. I slept for 2.5 hours and missed the majority of the flight. As we were landing, I read the in flight magazine which I actually really enjoyed and learnt about Tiger’s plans to focus more on customer services and making the process easier for passengers. Smooth landing and I arrived in beautiful, sunny Alice Springs.

You’ve really lifted your game. I will actually start to look at your fares for future flights and destinations as I have been impressed with this current experience.

P.S. Thank you to KAYAK.com for their great flight search tool. Without that, I would never have thought to even look at Tiger and would probably be $700 out of pocket.

Learning about the land.
Vietnam 🇻🇳 brought to you in #Melbourne!
Larapinta Trail.
Melbourne
NAIDOC week begins this week.
Travelling with my baby.