Amazing to take part in the Peter Canning Cup 2012 last Friday 27th March in Omeo Victoria. This was a fantastic event for the community of the Alpine region and I was so honoured to be a part of it.

See below the press release with antics from the evening. 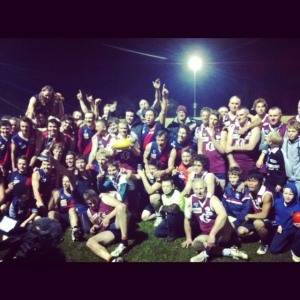 Dinner Plain/ Hotham, Victoria:  Celebrity AFL Match, The Peter Canning Cup, was played on Friday 27th July 2012 and raised more than $7000 for Motor Neurone Disease and the Omeo Hospital. The cup was reclaimed by the Dinner Plain/ Hotham Demons at the Charity football match in Omeo, Victoria on Friday night.  The young guns were coached to glory by AFL Legends Robert Flower, Wayne Walsh, Stephen Powell and Guy Rigoni who were more than happy to show their support for this great community event.

This was the second year of The Peter Canning Cup which is in honour of Peter Canning, a legend of Dinner Plain and the snow area surrounds. Peter’s good heart and fun spirit have not been shadowed by the Motor Neurone Disease he now lives with day to day. The funds will go to Omeo Hospital in order to support those living with Motor Neurone Disease and their families and friends who care for them.

The Celebrity coaches were wrapped to be part of this great event. Wayne Walsh, a now veteran of the Peter Canning Cup with two years of attendance, was proud to see the young guys giving it there all. “This is a fantastic event for football and for a very important cause, Motor Neurone Disease.”

It was Robert Flowers first year at the cup and he jumped right in as head coach of the Dinner Plain/ Hotham Demons. Guy Rigoni was a great supporting coach for the boys and gave a pep talk over the ground speakers after each quarter. “Kick it long and kick it hard boys. Keep it simple and remember we’re doing this for the Peter Canning Cup.” Guy said to get the guys revved up and ready for the big match. Ultimately their wisdom, experience and passion led the boys to victory and to reclaim the cup from the Omeo side.

There were many antics on the night. The inaugural girls netball match was played on the footy field due to slippery conditions on the actual courts. The Dinner Plain/ Hotham girls took it out – despite half the crowd running on the field/ court to help out the Omeo team. One of the gutsy girls even decided to shamelessly but bravely streak for the cause. Raising $500, Claire the Streaker as she’s now known, ran the race of her life across the middle of the AFL match.

Peter McKenna of the Dinner Plain Advisory Committee and Dinner Plain Residence and Business Operators Society says: “The Peter Canning Cup for a cause that means so much to the people of Omeo, Swifts Creek, Dinner Plain, Hotham and the Alpine Region.” He is thrilled by the support of the local communities, the Celebrity AFL coaches who gave their time so generously and all the participants.

Big thanks to Boags who sponsored the beer tent which raised a lot of funds on the night. Also Patties Pies of Bairnsdale whose provision of free pies and sausage rolls kept the crowds cheering all night. We’ve raised more than $7000 and the total is rising with sales of DVD’s to come and donations still rolling in. 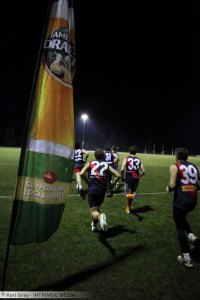 For more information on The Peter Canning Cup and video footage from the great event please contact Emma Lovell on contact details below. You can also see images at www.int-m.net/canningcup.

For further information, images or an interview please contact:

About our Celebrity AFL stars: 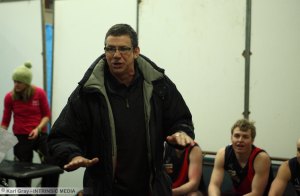