The World’s Largest Fun Run and my prep for climbing a mountain!!

City 2 Surf is one of my favourite events of the year. I really would like to get into more sporting events such as this but at the moment, this is the big kahuna and the one I make an effort for.

14km of hills, amazing views of harbour and the beach, and 85,000 people puffing and panting as they take on the arduos adventure.

This was my 4th year in the city to surf and I was again a part of the UTS Team. I love doing it with such a large team and being able to meet new people as well as catch up with old friends. I tend to run alone but if I see fellow UTS’ers I can run/ walk with them for some company. I also use them as goals/ targets to keep me on track- either to keep up with ot overtake any UTS people I see hehe. You need games like this when you’re doing such an event.

This year I was in the yellow group which I was a bit annoyed about as I had worked my way up to green group. One I didn’t do such a great time last year and two I registered later and so my team placed me in the yellow. It sucks cos you leave 1 hour after the race starts and with about 40,000 people in front of you! When I was green there would have only been maybe 5,000 or so in front.

I did a time under 100 minutes two years ago, 98 minutes to be precise which got me into this group.

I knew last year would be tough due to my back injury from late 2009, so I did my best and was proud to still run a pretty solid amount and get under 2 hours. This year I was sick for 6 days, and did no exercise in the 9 days leading up. Mylungs and chest struggled at the start of the course in the cold and rain and my body felt stiff. I didn’t think I would make it and started to question my fitness for the huge challenge of a mountain climb which I will be undertaking in just under a month! But I got into a rhythym, pushed past the the mental barriers and told myself to get on with it. I ran as fast as I could as far as I could when I felt the energy bursts and set goals- and to my surprise and delight, I managed to do under 2 hours again.

I decided this time with my handy dandy i-phone to alsl Facebook status update as I went along. It was fun and actually became a bit of a game, something else to keep me on track, knowing others were watching my progress. I updated from:

–       5km mark about my lungs and viral infection not helping

It was a great thing to do in the lead up to my big mountain climb, and nice to know that at least I don’t have to run it. Now with just 31 days to go! (leave exactly a month from today) it’s time to get on with the training and get as fit as humanly possible in this time!! Or Emma possible 😉 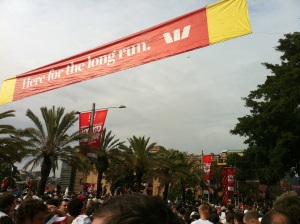 City to Surf is also coming to Melbourne in November – City 2 Sea!! Excitting. Who will be joining me in this inaugral event? Up for the challenge?

I will be taking on my biggest Adventure yet, Climbing Kilimanjaro for Alzheimer’s Australia NSW!  I will Climb Kilimanjaro in honour of my Grandpa who passed away from Alzheimer’s in 2008. I was in Africa when I found out and I said at the time I would one day do this for him, in his memory! We are raising money for Alzheimer’s Australia NSW to raise awareness and the necessary funds for prevention of the disease that affects so many. Dementia is the third leading cause of death in Australia, after heart disease and stroke. We must prevent and find a cure as it’s not a normal part of aging, and does affect 100,000’s of Australians.

Help me reach my $10.000 target by donating to my online fundraising page:

The Sunshine state! We've reached Emma's current homeland, the perpetual holiday destination that is Queensland. Resort style living, epic beaches, amazing rainforests, world wonder of the Great Barrier Reef - this state has a lot going on.
Get to know our guest on the #SouthAustralia episode this week, Naomi Robinson. She shares with us on episode #75 about her former home state and provides some excellent tips on things to see, do, experience and of course, eat and drink!
We're heading South now on our vicarious tour of Australia to the very aptly named, South Australia! It is in fact the state in the middle of Australia at the Southern end. World famous for its spectacular wines, this state has so much more to offer than just its delicious range of grape juice.
Loving this Australia series and exploring my own country. We welcomed back our regular guest Danielle Phyland from @possandruby to explore her home state, #Victoria! Fun fact: I once lived there for 3 years!
I love visiting #Victoria and one of my fave places to go is the snow ❄️! The Aussie Alpine region. I’ve snowboarded at @hothamalpineresort, @fallsaustralia, & @mt_buller and love them all. #FallsCreek has somewhat become my home mountain through volunteering with @disabled_wintersport_australia. I’m missing it a lot after a few years of not being able to get down - pandemic and injury halting me - but I’ll get back as soon as possible.
R U OK?