Bangladesh has suprised me with it’s beauty, warmth and calm. I have such fond memories and happy thoughts of Dhaka. I was only there 10 days ago and I’m already planning when I can get back there.

I had been warned continuously of the shocking things I would see and experience. How Bangladesh is very much a developing country which still has a long way to go. I was told to constantly be on alert for my safety and to be weary of everyone. But really, I did not expereince this. 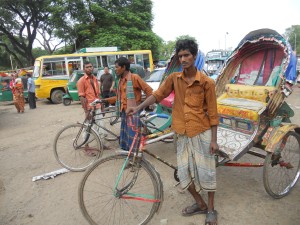 I felt happy and safe at all times. I felt the roads were reasonably organised and people even stuck to the lanes and followed the road rules, surprising in South Asia. I saw poverty yes, and not wanting to become compacent or immune to the harshness of these peoples lives, but I do now understand that with a population size so large, not all can be having the same living stanard. More than 21 million people live in Dhaka, and with 160 million plus in the country, it is one of the most densly populated countries in the world. There is to be expected some difficulties in regard to getting everyone equal conditions. It’s hard to see-  but I cannot place my own society and cultural perspectives onto this society. Nor can I indulge the street life by giving into begging. There are ways to deal with this and I strongly believe that we can do a better job in greater umbers by then small amounts to individuals.

Wow- bit of a rant but it’s what I have experienced and seen.

I didn’t read the papers when there, but was often given a run down by one of my colleagues. Murders, rapes, divorces, riots and strikes. This was the norm in the paper everyday, but to be fair, it is found in many other countries too. There is most certainly corruption and I believe in time this will be changed as more international companies move in and outside organisations and NGO’s work with local governments and businesses. But things do take time.

Wonderful though to see a female Prime Minister. I was also informed that the opposition leader is also a woman, and the Secretary is also a Woman. This is some sought of progress at least, for female kind. There were lots of women in employment as well in various roles, and men seemed to be respectful.

I would like to spend more time in Beautiful Bangladesh and understand it a little better. Perhaps in a way though, I don’t want to delve too deep and see the inner workings of the country, I’m sure there are things in the way they run the country that they are not proud of but the same can be said about Australia.