I have never been a fan of AFL. I admit it. It’s not a popular sport in NSW and really and truly the rules are just a mystery to me.

I played AFL for a GALA day when I was 12 and also studied the game in Human Movement in year 10. Even with an understand if the so called “rules” which is even in the title of the sport “AUSTRALIAN RULES FOOTBALL”, it still seemed like anarchy and chaos to me.

I had been told that I had to get myself to a game and then I would understand the excitement and passion behind the game. PASS. I never had the desire nor need to act upon this. And as there is only one team in Sydney, games aren’t as regular and only a few of my friends ever go. 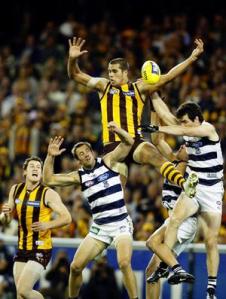 Now that I live in Melbourne, I thought it was time to learn a little more. When asked what team I would follow I responded “Sydney Swans”. Just because I live here doesn’t mean I’ll abandon my city. I’ve always gone for them even though I don’t follow the port and I’m not gonna be one of them turn coat people!

On Tuesday, I had to work at the Hawthron Hawks game at the MCG. An excellent time to explore the AFL world and learn more about it. I could not believe the turn out. You would think it was the Olympics. More than 70,000 people in attendance (the day before had been 89.000 to the Collingwood and Essendon game). Madness!! It was just  mass of people and a see of yellow and brown and blue and white. These are true fans.

I was very lucky to be offered free tickets to the game after and as I have never been and I ahd nothing planned, I went along. To my surrise….. I loved it! I had so much fun and agree that you must go and watch a game live to understand the excitement. Being able to see the whole field makes such a difference. The TV doesn’t do it justice as it is just too close to the players or too far away to get the real feel of it.

The men are amazing atheletes, and I didn’t mind having a bit fo a perv too. They’re hot! I mean, fit, yes very athletic and FIT!

It was a great game too. Geelong were flailing at the beginning and it looked like the Hawks would dominate, but late in the first quarter Geelong came charging back and Hawks couldn’t recover. An amazing last quarter and some beautiful goals meant that after more than 2 hours of play, Geelong Cats were the winners.

Brilliant! I will definitely be attending more games. What a buzz!! MCG is an amazing venue too and just to experience a crowd that size in a sporting arena of that caliber is special. Having seats in Level 1 only 13 rows from the front is also a pretty good way to view a match (HUMBLE BRAG). Perks of the job.

Are you an AFL fan?

Mixing up my views locally by hanging out at my in laws holiday house. It’s been nice getting to know a different area on the #GoldCoast. We don’t have to go far too be adventurous
In April 2020, I honestly did not think that we would still be here in a world that is impacted by a pandemic. But here we are!
Emma visited Ibiza in 2006 for the first time for the typical party trip but then had the pleasure of seeing the local side to the island with not one but two visits to catch up with Annemarie in 2012 and 2013!
Remember these? Actual photo albums? Had to dig one out to find my #France 🇫🇷 photos from way back in 2006 & 2007! The rest are on CDs ... remember those!!!! My computer doesn’t 😂
Palais vous francais?
Mongolia 🇲🇳 memories!