Caribbean cruises are exotic, exciting, relaxing and luxurious way to spend your holiday. Sneezing, rubbing itchy eyes and coughing up a lung should not be associated with cruising. Sadly, as Smoking is still permitted in a number of areas on the cruise, these are some of the things you may experience.

One of the first places that smoking was banned was an aircraft. Next were shops and restaurants. Bars came along soon after – even in major cities like New York, London and Sydney one must smoke outside. Places such as Paris have even gone to the extent of banning smoking anywhere within the vicinity of an eatery.

So why I ask you, do they still allow people to smoke on a cruise ship. A transportation device and vessel of mass proportion. Carrying 4000 people, would one not think that smoking would be somewhat of a , I don’t know, FIRE HAZARD.

I did mention my disappointment with the lack of restriction on smoking to the Cruise staff and also placed it on numerous feedback forms. On the Royal Carribean cruise ship, people can smoke: 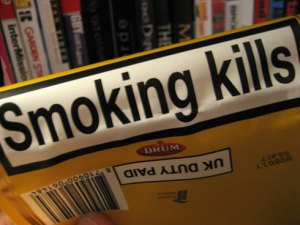 My friend and I went outside one night to get “fresh air” and were joined shortly after by a random smoker who stood in front of us and blew his smoke into the wind, incidentally which blew straight into our face. Why should I have to put up with this?

I woke up every morning with a blocked nose, a sore throat from breathing out of my mouth, a scratchy throat from talking through the smoke and an irritating cough. It made me feel lowsy. Now, one might say I could avoid the Casino and Night Club and therefore reduce my risk of such symptoms. Honestly though, it’s not going to happen.

Smoking should be banned on cruises. If people want to endanger their health, they can do it elsewhere. Give us all a break!