Well not all 25 million of Mumbai’ s population are comedians, but in the HQ club on the Colaba Causeway on Stand up comedy night, they are. The title more has to do with one particular comedians approach to comedy on the night…… taking a stab at Emma and Australians during his routine.

I was staying with friends in Mumbai and was told on one particular night we would be attending a stand up comedy night. I was thrilled as I had never been to a live comedy show but had always wanted to go. Even more enticing was the fact that we knew one of the comedians as he was a friend of the people I was staying with.

We arrived at HQ in the popular Mumbai tourist zone of Colaba. Here there are markets in the day and busy restaurants and bars in the night. HQ, a trendy night club and bar is at the start of the Colaba causeway. We ascended the stairs to meet my friend’s group who were there to support their friend on his big night.

The night would have 4 amateur comedians doing a 20 minute set each. And they were most certainly placed in order of hilarity. The 1s being terrible, the 2nd tiring towards the end of the long routine, the 3rd very funny and able to keep the laughs coming and the 4th had everyone rolling on the floor with laughter.

Little did I know when my new friend, the 4th and final comedian Rohan Joshi, started his set that I would soon be come the focus of the entire room. As comedians always do, he touched on subjects close to the audiences heart such as the inter state rivalry, food of the country and crime. He then went on to comment on the audience before posing the question “Is anyone here from Australia?”  My dear friend Priyo had told me that the comedian would have a surprise for me, but insisted it wouldn’t be a joke. Lucky I didn’t trust him as far as I could throw him because very quickly, all eyes were on me and Rohan was ecstatic to be able to use his Australian Jokes in a live routine.

The lovely Mr Joshi first chose to comment on the recent student attacks on Indians in Australia, a touchy subject, he begged me not to hurt him for what he was about to do. He then posed 2 questions to me “ 1. Do we get a birth certificae or a warrant card? 2. Am I here on holiday or parole?. He finished off the torture by stating it was ok that we’re all convicts, he can forgive us for threatening Indian students but I must apolgise for Inflicting Fosters on India. The Australian Beer, which is rarely sold in Australia can be found everywhere in India and Rohan Joshi said “You can immediately identify the people in a bar you don’t want to talk to by the beer they are holding, you stay away from those drinking Fosters”. It’s a sore note and a typical joke we Australians get when we travel, but really I think I got off lightly.

I survived the onslaught and after his set Rohan made a beeline to me to beg forgiveness. I too offered an apology, of course for the amber ale of my country and all was forgotten. A great night and certainly an experience to be included in the a stand up comedians routine. 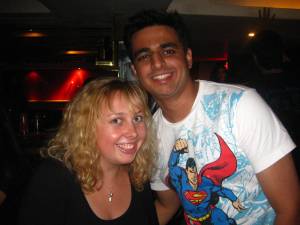 You can see the hilarious antics of Rohan Joshi here on a live You tube streaming:

Or on the Indian TV show, Times Drive India- on which Rohan Joshi is the host: